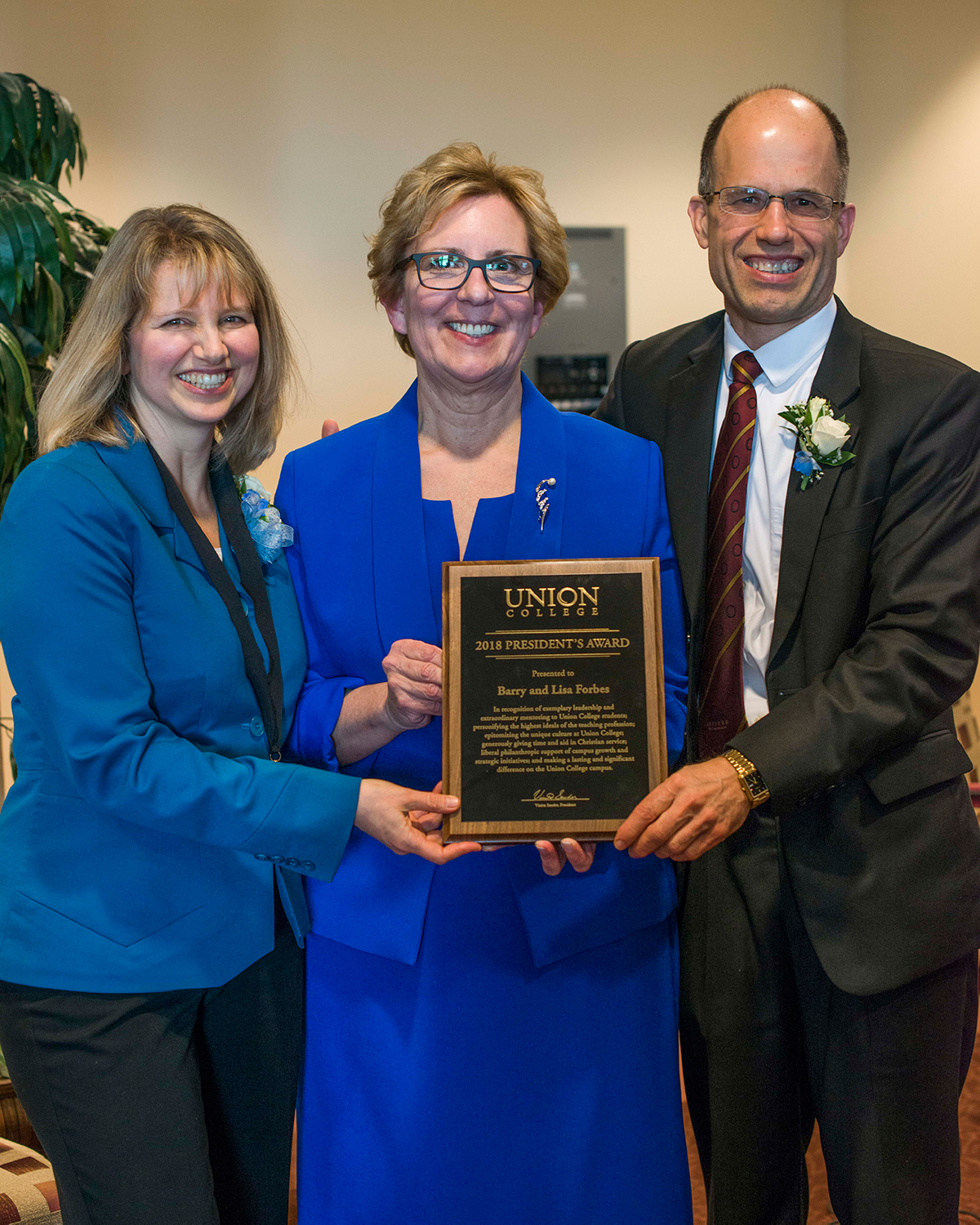 Drs. Barry and Lisa Forbes have been the anchors of Union College’s Division of Business and Computer Science for more than 20 years—where Barry serves as the chair of the division and Lisa is a professor of accounting and finance.

For their leadership and service to Union, Dr. Vinita Sauder awarded the couple the President’s Award at a special ceremony during Homecoming Weekend 2018 on April 7.

“This award is not given every year, but it is presented when a person is found with exemplary leadership, a dedication to the Lord and His work, a strong pull to be a servant leader and the embodiment of the values of Union,” said Dr. Vinita Sauder, Union College president.

Dr. Barry Forbes has led the Division of Business and Computer Science for the past 11 years. He started working at Union in 1988 and managed the campus store until a full-time teaching position became available in 1991. Since then, he has helped to build the business and computer majors into some of Union’s largest programs.

The couple, along with rest of the team in the Division of Business and Computer Science, developed the business mentorship program, which connects students with community business leaders. Barry also helped establish the Business Advisory Board, which helps identify strategies and funds for the enrichment of their students’ experience.

“When I was presented with the award, the love and appreciation I received was overwhelming and wonderful,” said Barry.

Sam Huenergardt graduated from Union College in 1999 and was recently named president and CEO of Shawnee Mission Health. He remembered first meeting Barry as a sophomore. “What struck me was his truly genuine concern for me as an individual,” said Huenergardt in a letter written for the award ceremony.

At first, Huenergardt thought Barry didn’t seem like the “coolest” or “most suave” guy on campus, but then he saw differently. “After working with Barry for three years, I know he poured himself daily into making me a better person, which upon reflection, is the coolest thing one human can do for another,” Huenergardt said.

“When I first found out that my husband and I would be receiving the President’s Award, I was shocked. But it was a great honor and privilege to receive it,” said Lisa. “My main purpose is to train students into leaders, and show them just how much potential they each possess.”

Andrew Whitlock graduated in 2007 and is now the director of net revenue and analytics for Centura Health in Colorado. While both Forbes impacted his education at Union, Whitlock remembered how Lisa mentored him when he switched from a management emphasis to accounting and finance.

“Lisa provided me with the encouragement and confidence to catch up with the accounting courses I needed,” he said in a letter written for the ceremony. “She always had a smile on her face and took the time to really explain how to apply what we learned to real-world experience. I try to apply the same style Lisa used to the team members who report to me. I was never afraid to ask her a question and I know she genuinely cared about my future.”