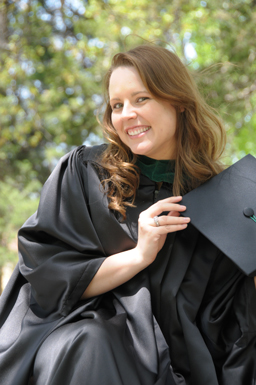 Sometimes it’s hard to know where your life will take you. Since receiving their diplomas, alumni of Union College have gone on to be geologists, veterinarians, nuclear physicists, physicians, teachers, nanotechnology researchers, eye surgeons, board members of the FDA, and much more. Read more about what our alumni have done, and let their lives inspire you to imagine what you can do with a degree from the Division of Science and Mathematics.

Division of Science and Mathematics

After college graduation in 2002, Carrie went on to study medicine at Loma Linda University Medical School. Carrie says "Union was one of the best experiences my life. I grew as a person mentally and spiritually—I really appreciated the staff because they were more than teachers; I considered a number of them as friends. I liked the fact that I could talk with them one-on-one and that they would take time to help me and just to listen."

Upon graduation from Union in 2000, I went to Loma Linda University Medical School for four years. The experience was incredible and I have many wonderful memories of my time in Loma Linda. I decided to pursue an Ophthalmology residency, and I was very blessed to be accepted into the program at Loma Linda. After another four years, I completed residency and then moved to Minnesota. Despite the long winters, the summers are magnificent, and I thoroughly enjoy life here and have embraced private practice. I now work for Allina Health and am fortunate to be the Lead Ophthalmologist for the organization. The leadership skills I gained at Union were invaluable in training me for real life outside of schooling. When not working, I enjoy traveling and spending time with my son, who was born in 2009. I hope to come back to Union soon and I am anxious to see the new science building.

"Of the four years that I spent at Union College, I worked three of them as the microbiology lab assistant for the great Henry Zuill. Because of that laboratory and teaching experience, I became very excited about microbiology and teaching. As soon as I completed my bachelor's degree in biology in 1998, I went directly to Loma Linda University's Division of Microbiology and Molecular Genetics Program. There, I met and married David Phillips and completed my Ph.D. in 2003. Upon completion of my degree, I did a postdoc at the University of California-Riverside for a year and a half before moving to Reno, Nevada. in 2004, we had our first child, Anna. I accepted an invitation to teach in the biology department at Southwestern Adventist University in Keene, Texas where I am now the chair in 2005. We welcomed our second child, Shane, in 2007."

"After graduating in 1984, my wife and I got married, and then I entered the College of Veterinary Medicine at Kansas State University. I graduated with a DVM in 1988, and we moved to Perham, Minnesota in a two-doctor mixed practice for a a little over a year. In November of 1989, we moved to McMinneville, Oregon, where I became the second doctor in a large-animal practice. In 1995, I purchased that practice and renamed it Valley Equine Veterinary Service, Inc. to reflect the majority of my clientele. I have had some associate veterinarians over the years, but am currently practicing solo. We added a son named Brian to our family in December of 2001. He keeps us hopping in our middle age."

Since graduating in 2004, Melissa has gone on on to pursue a Ph.D. at the University of Nebraska-Lincoln. Melissa says, "I really enjoyed being a biochemistry major at Union. The teachers in the science division made an effort to actually get to know me. There always seemed to be a professor nearby to answer my questions when I was in the lab working on an experiment or research project."

"After Union, I completed a Ph.D. in organic chemistry at the University of Oklahoma and postdoctoral work at the University of Texas-Dallas. In 1995, I starter working for Brewer Science, Inc. in Rolla, Missouri. I worked in the Research and Development Department designing materials for the microelectronics industry. Since 2008, I have been on assignment to IMEC in Leuven, Belgium. IMEC is the world's leading consortium in nanotechnology research. Researchers from around the world perform collaborative research in the development of the next generation of microelectronic devices. I am married to Alice Martin (UC class of '88) and have two daughters, a seven and a nine year-old."

"Since graduating from Union College in 1981, I have received my Master's degree in physical chemistry from the University of Nebraska-Lincoln and a Ph.D. in analytical chemistry from Iowa State University. I have taught at the Hong Kong Adventist College, held management positions at Abbot Laboratories, Kos Pharmaceuticals, and Boehringer Ingelheim Pharmaceuticals, Inc. I have served as chairman of the U.S. Food and Drug Administration (FDA) Expert Panel on Orally Inhaled and Nasal Drug Products (OINDP). Currently, I am serving as the Senior Director of Pharmaceutical Analytics for MannKind Corporation in Danbury, Connecticut and am a member of the Board of Directors for the International Pharmaceutical Aerosol Consortium on Regulation and Science (IPAC-RS)."

"Soon after graduating from Union College in 1961, I began working for the United States Geological Survey (USGS) as an analytical chemist. I was part of a group of chemists and geologists researching methods of prospecting for metals using chemistry. Those methods were then used to help assess the mineral resources of areas such as National Forests, Bureau of Land Management lands, Indian Reservations, and proposed wilderness areas. Soon after starting work with the USGS I was assigned the task of equipping a field chemistry lab and transporting it to Maine where I analyzed geologic samples for the field geologists. Close association with excellent geologists and my love for the outdoors prompted me to enroll at the University of Colorado and obtain a doctorate in geology. My dissertation combined the fields of geology and geochemistry and I continued to work with the same group, but as a geologist instead of a chemist. Our base was Denver but my field work was in Maine, New Hampshire, Arizona, California, New Mexico, Idaho, Nevada, and Colorado."

"After attending Union and earning a bachelor's degree in chemistry, I started medical school at Loma Linda University. Then I took a three-year residency in Opthalmology because I liked the math and science associated with optics and lenses. I learned LASIK surgery in the nineties. A lot of math is involved in calculating the amount of correction needed to give a patient 20/20 vision, and to correct for astigmatism. I have performed cataract surgeries since 1966. In addition to the actual surgery, this involves calculating the power of the intraocular lens that is implanted in the eye by using ultrasound scans to determine the length of the eye and corneal curvatures. Lasers have become an important part of opthalmology; learning to use excimer and yag and diode lasers has been interesting. The calculations of moving eye muscles and how much, then reattaching them to correct crossed eyes in children and adults is a welcome challenge. I love what I am doing, and am still practicing at age seventy-five. "

"Since earning my degree at Union College, I have attended Loma Linda University and graduated from medical school. After completing a residency in Anesthesiology, I got a job in Denver, Colorado, working with a large group of physicians (approximately 85). I am currently the Chair of the Department of Anesthesiology at Littleton Adventist Hospital. I have been married for sixteen years, and my husband and I have a seven year-old daughter."

"Since graduating from Union College, I have taught for two years at Sandia View Academy in New Mexico, earned degrees in geology and nuclear physics, and worked at University of Virginia and the Geoscience Research Institute at Loma Linda University. For fifteen years I studied nuclear shell models, and for the past ten years I have researched the geochemistry of granites in southern California and Peru. My wife Debbie Hughes Clausen is a diabetes educator for Loma Linda, and my daughter is studying Early Modern Literature at Notre Dame University. My years at Union College were some of the best of my life with caring professors who mentored me in integrating science with my Christian faith. In the summer of 2011, I helped organize a conference in the Canadian Rockies on teaching science in a Christian framework. This series was attended by several Union College professors."

"Jim started teaching physics at Union College in 1958. He then went to Colorado State University and became a graduate teaching assistant until 1963. From 1966-1969, Jim was a physics instructor at Pacific Union College (PUC) in Angwin, CA, where he taught Electromagnetic Theory, General Physics, Thermodynamic and Experimental Modern Physics. Jim participated in the Science Faculty Academic Year Institute, Special Training Division, Oak Ridge Associated Universities (ORAU) in Oak Ridge, TN from 1969-1970. This experience included work with low energy accelerators, isotopic neutron sources and nuclear instrumentation. His primary duties were the operation of ORAU 400 keV Van de Graaff and 150 keV Cockcroft-Walton accelerators. From 1970-1971, he was Assistant Professor of Physics at PUC, where he taught Wave Phenomena, Introductory Physics, Modern Physics and Waves Laboratories. From 1971-1997, Jim was a research associate atthe Center for Applied Isotope Studies. His duties included management of the environmental monitoring program, software development for the laboratory, design and construction of new counting systems and design and implementation of the quality assurance program for the laboratory. Jim retired from full-time employment at the University of Georgia in Athens, GA. He continued working at UGa part time on special projects which included presenting at a Radiological Short Course for a unit of the U.S. Environmental Protection Agency, Atlanta, GA from 1997-1998. In the fall of 2002 he taught Modern Physics Laboratory at Union College. From 2003 until the present, Jim has been a consultant for the Center for Applied Isotope Studies at the University of Georgia and Task, Inc. of Athens, GA. He is also the current Radiation Safety Officer at Union College."